We are currently using 58 Tortoise Slow Motion Switch Machines 800-6000 from Circuitron. They are reliable and have a separate set of contacts to use for non insulated frogs. Using the DS64 Stationary Decoders from Digitrax allows us to control all the turnouts on our layout from multiple control panels with push buttons, smart phones and even on a computer screen in another room. With JMRI software we can easily access each DS64 for setting addresses or using routes. That makes possible setting up a path that is our normal main line or setting all the turnouts for normal operation. All the turnout positions are visible on our computer screen and can be changed just be clicking on that turnout. If you had a touch screen, you could just touch the image on the screen to activate that turnout. During operating sessions we would normally only use our control panels to select turnouts to get trains out of the yard.

By the way when powering up the system, Digitrax will need some time to set every turnout to the closed position in sequence so as to not overload the power supply. This is how the system knows what position each turnout is in. However, that position may not be set for normal train travel. We use JMRI turnout code 999 to set a route for our normal train operation. Recently we have installed a separate switch to power the turnouts on after the main track power to the Digitrax system has been on for fifteen seconds. This allows us to run trains without using the turnout code 999 or the computer at all. However, the computer will not know what position the turnouts are in. On shut down the power to the turnouts is turned off first, then the main power. By doing this all turnouts stay in the position as they were on shut down. All DS64 are powered by 12 VDC from a computer power supply dedicated to only turnouts. We use another 12vdc supply for all other uses like signs, crossing gates and electronic devices.

With such a large number of turnouts we use a spreadsheet to keep track of the addresses, wire colors and location of each turnout. We have mounted the DS64 Stationary Decoders at two locations near where they are used. One location is along our back aisle and the other is on a door along a wider aisle. Most turnout motors are wired to a large plywood panel under the layout near our main yard. From there 50 strand cables connect to the banks of DS64. From those terminal strips, cables go to our control panels. All our control panels use bicolor LEDS and push buttons to control and indicate the position of each turnout. 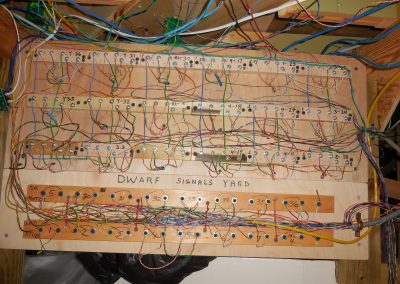 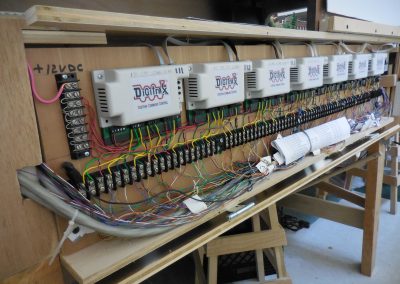 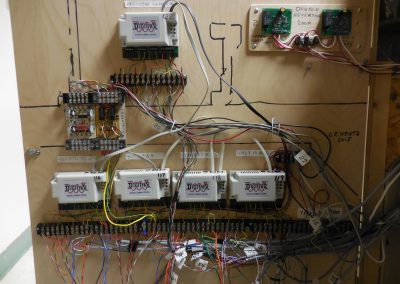 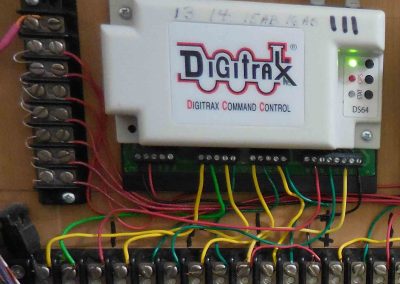 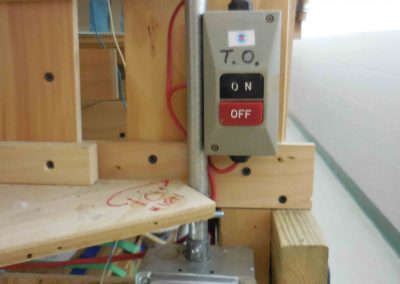 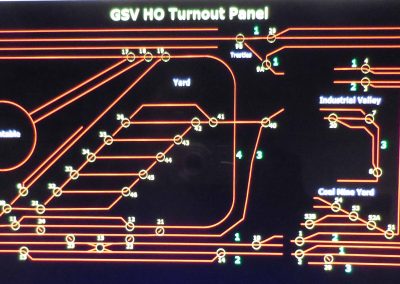 Computer Screen of all Turnouts 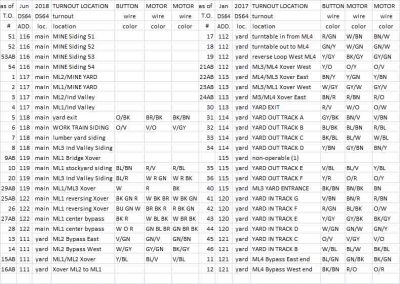